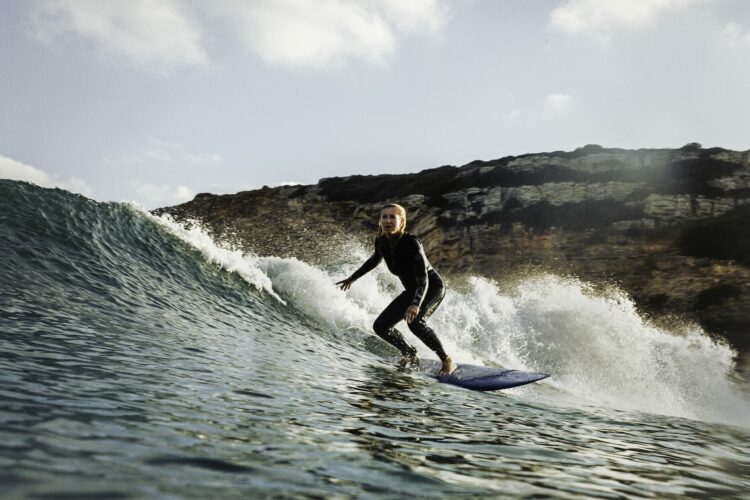 14 Jul How to read a surf forecast

We’ve introduced you to how to buy the right surfboard and how to buy your first wetsuit, so you might now be totally ready to hit the water. But wait, how do you actually know where there will be waves and if the waves will be suitable to your level?

You could keep it as a surprise or make it into an epic surf search adventure. You could just chance it and rock up to the spot for an ‘eyeball’ surf report, or you could let us help you take the guessing game out of surfing. When you first look at surf forecast, they might seem a little daunting. All these numbers and arrows, how can you make sense of them?
There are a few things to know which will help you get it right.

First of all, it helps to have a rough idea what area/spot you’d like to surf. This way you can refine your search. There are a few different websites that offer surf reports for most spots around the world, the major ones being Magic Seaweed or Surfline, but quite often you can find smaller and more local forecasters in the area you are looking for.

The surf forecast for your chosen spot will most probably look something like this; or very similar with the same main elements (either imperial feet/mph or in metric metres/kph, you can usually toggle between the two):

Before you can really interpret the whole forecast, you’ll have to get to know the geography of the spot, meaning what direction the beach, reef or bay is facing. Is it an open beach, reef or does it have shelter from hills etc?

The forecaster’s closest prediction to the average size of waves at this particular spot, taken into account swell and wind conditions.

If you are unfamiliar with the spot, you’ll have to take the forecaster’s word for it and base your chances on the predicted wave height. You could always check the probability of the forecast if this is given. It pays to read the forecast before you go and compare it to the actual conditions. Once you get to know a spot better, you’ll know if the forecasts are usually correct or not.

In this instance the forecaster, Magic Seaweed, has given their prediction a quality star rating of how good they believe conditions will be. But this is of course a little personal, as some like it small and some like it big. 😉

Swells are caused by far away storm systems that create ‘ripples’ that travel across miles and miles of open ocean. Swells can vary hugely in size and force, depending on how strong the storm system is and how far they have travelled. When swell reaches the shallows of the shore, the energy (if big enough) gets turned into breaking waves.

Swell isn’t only made up of ‘wave height’, but another major factor, maybe the most significant, is the ‘wave period’. This represents the time between 2 waves and is written in ‘seconds’. It tells you something about the energy or force behind each wave. The bigger the period, the more powerful the waves will become. The big period swells are also referred to as ground swells and are usually created by big storm systems far off the coast. Short periods are usually created by wind closer to shore and tend to be a little ‘choppier’. Bigger periods often create cleaner waves.

It would be easy if there was only ever one storm system in the oceans at any one time, but it will always be windy somewhere. Swells will be created constantly, whether big or small, close or far. So secondary swells are often an occurrence and could come from a totally different direction, interfering with the primary swell and its ability to create clean or surfable waves. When these 2 are significantly long period swells, the crossing can be very obvious, forming a cross sea:

Now this is where the geography part of knowing your spot comes into play. Knowing the direction of both land and swell will tell you whether the swell is coming directly into a bay, onto a beach or has to travel around a headland or even a whole peninsula, … This makes a huge difference in how much of this swell ‘energy’ will be able to turn into surfable waves. So swell direction and the direction of the spot need to be seen together. But that’s not everything!

Unfortunately, there are many elements that will influence the surf-ability of a certain spot.
Next to the swell, wind plays a major part. Ideally you don’t want any of this. No wind will give you the cleanest waves, if you have a considerable swell. Those are the ‘perfect conditions’. But coasts are not known to be still… so if you have to make do with wind, then the next best thing are light offshore winds (blowing away from the land towards the sea). (Hello geography again! J) These winds would create nice open walls on the waves, offering you more to play with.  Cross shore and onshore winds aren’t ideal, as they will interfere with the cleanliness of the waves. Of course, the stronger the wind, the messier the conditions will be too! Strong offshore winds and you might be totally blinded by spray during take-off. Remember to take the geography of the spot into account. Are there hills that could offer shelter from certain wind directions? Some spots close to deserts or by islands might have specific wind conditions as the day progresses and the land heats up etc.

Yes, tides are visible anywhere where the OCEAN meets the land. For those of you unfamiliar, tides are generated by the gravity of the moon (and the sun). The moon pulls the water as it circles around earth, creating a steady rising and falling rhythm of eb and flow across the earth. This is why ‘spring tides’ (biggest tide difference between eb and flow) occur during full moon and new moon as the gravitational pull on the oceans, by the moon, the earth and the sun being aligned, is at its strongest.
Tides will eb and flow twice a day and you’ll have 2 spring tides in a month (full moon and new moon).

Now, tides aren’t included on the picture of the forecast above, but another important factor to keep track of and another one where it pays off to get to know your surf spot. Not all spots work on all tides. Some work better ‘on the push’ (when the tide is coming in), some better on low or high, … Ask the locals, or take note over time as you get to know the spot better.

Waves might look epic, but make sure you always familiarise yourself with a surfspot before heading in. Speak to locals or watch for a little while to know where it’s safe to paddle out, where there could be rips or hidden rocks and objects under water hidden by the tides. Speaking to locals might seem daunting sometimes, but better safe than sorry. They will usually be honest about conditions and will be happy to help out fellow surfers to keep everyone safe. Always be honest with yourself and others about your ability. We all had to start somewhere!

Remember! Surf forecast are predictions… the ocean and weather can be very changeable at times so just like with the weather forecasts… they don’t always get it right.